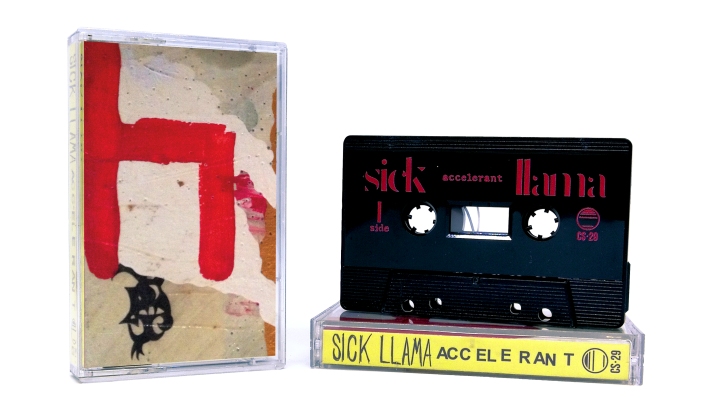 Sick Llama is the solo project of Detroit’s experimental / noise artist Heath Moerland, also an operator of the Michigan-based Fag Tapes label. Sick Llama does not belong to the American noise scene. He is the American noise himself. All the tools are here: punk aesthetics, strong diy attitude, hundreds of releases in both Fag Tapes and like-minded fellow labels (American Tapes, Gods of Tundra, AA Records t? name a few) and a sonic coming-of-age that broadens the frame of noise towards more experimental soundscapes without losing the artist’s distinctive sound, at all. While respecting every possible extension of the reasoning behind leading a scene, although this still remains American noise, Heath Moerland has worked with dozens of like-minded vandals and has recorded under 30 other aliases at least,like Barf Thoth, Slither, Human LoopThe Solar Furnace (with Mike Conelly of Hair Police), Tape Deck and Crazy Doberman (with John Olson) and many more.

“Accelerant” album comes to Coherent States at a time when Heath announces the imminent closure of Fag Tapes once it reaches 500 releases. It’s hardly long now until this happens and it is going to be a dynamic event, since the multi-year course of Sick Llama is parallel and synonymous to Fag Tapes . The heterogeneity of the five “Accelerant” tracks is another way in which Heath Moerland “teases” the listener. The earthly beggining will not bring the -expectedly- churning outburst. The massive drone repetitions that momentarily become hints of rhythm only to retreat once more into subdued and atmospheric tape manipulation, don’t have the linear flow that would emanate more an essence of synthesis and less a sustained improvisation. “Accelerant” would be all the sonic obsessions of Heath Moerland if someone asked him to demonstrate them on the spot in a twenty minute time. Sick!