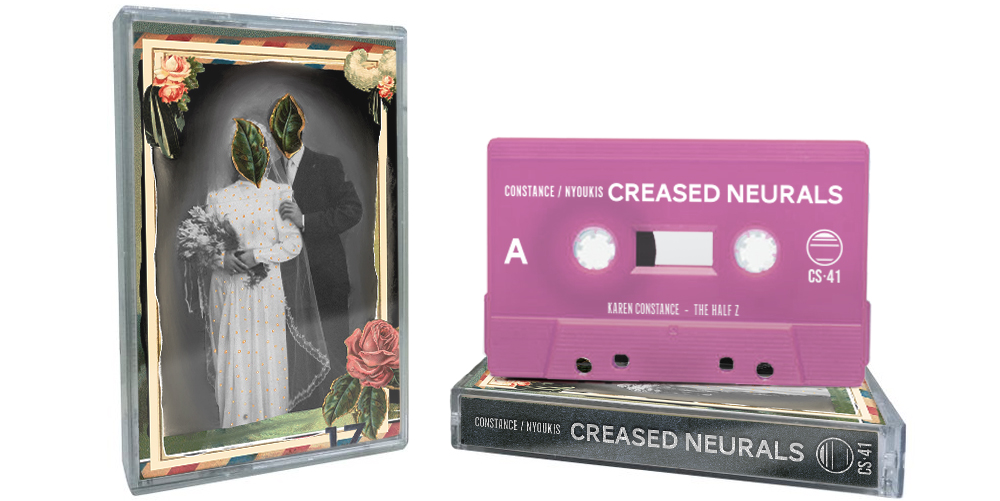 “Creased Neurals“ is a split cassette by the reformed surreal duo Constance/Nyoukis, aka Karen Constance and Dylan Nyoukis, the artists formerly known as Blood Stereo. Blood Stereo became active back in the days of Karen and Dylan’s “Here Comes Blood Stereo‎” cdr which was released by our fellow label absurd back in 2006. Dylan and Karen’s “There Goes Blood Stereo” cdr was included in their WHIT? box set, released by Chocolate Monk on December 20th 2020, the day Blood Stereo name was killed.

“Creased Neurals“, out now on Coherent States, is a strange mix of collages, gurgles, burbles, tape hiss, heavy lungs, throats, ridraws, half vocals, shared fantasies, warbles, soft gasps, imaginary thrusts, nauseated dialogues, weird yelps, whistles, klobs and cut-ups that evolved in the mighty kingdom of the Lo-Fi during the year 2021. Split in two sides (Karen’s “The Half Z” on A and Dylan’s “Unpopular Sounds For Voice & Tape” on B) ‘Creased Neurals’ contains an unimaginably smooth blending of tape loops, vocal manipulations, synthesizer sounds and electronic outbursts. This is the second of many steps to come inside Wino Lodge. Constance/Nyoukis are back.

Karen Constance is a sound explorer, self-taught painter & collage artist. She was a member of the legendary underground act The Polly Shang Kuan Band and the person behind Smack Music 7. She has exhibited her work in many countries and her artwork has been featured on many Chocolate Monk releases as well as in magazines. Her own artbooks include Ten Canon Creaks, Pin Down, The Enlightened Girls, and many more. Was also the one half of Blood Stereo.

Dylan Nyoukis is an experimental sound artist and legend of the underground cassette circuit since the early 90s when he founded the Chocolate Monk label with more than 500 releases – still active when you read these lines. He was a member of Prick Decay, Decaer Pinga and The Mongoloid Men. Was also the other half of Blood Stereo.